Okay, so with all of these above, finally started our much-awaited Trek to Prabalgad/Kalavantin. We have been planning for this trek for more than a week now. Although the group was new to me except for Samir aka Sam, it took no time for all of us to mingle and become buddies.
On a super rainy Sunday of June 2016, being monsoon the biggest motivating factor for all of us, we started our journey from Mumbai. We were 5 of us where Sam was supposed to pick me up at 6 in the morning from my basera at Andheri, (as usual he got delayed by 45 odd minutes, I forgive him :p) and 3 more guys aka Punit, Papa dude (Anoop) and Shashank were to join us from Navi Mumbai. Sam and I cruised at the speed of 90-100 in Sam’s beloved RE with no rains in background (shit, why the hell it is not raining today) little did we know that we were cruising “Bhagwan Bharose” because supposedly a nut & Bolt which connects the handle and tank of motorcycle was almost gone. Sam, being an experienced rider figured that out soon before everything went off and we got off safely. We took deep breadth, thanked God for our new life – Whoa, Adventure has already started.
We parked our RE at Seawoods and joined our friends in Punit’s car. By the way it started raining by that time and we were super happy & excited. After a vada pao and tea break, we reached the point from where we were supposed to start the trek. We got in action, dressed up with all required arms and ammunitions and started marching ahead. This trek was new for all of us but we decided not to take any guide and explore the mountains on our own. Initially the path was broad and muddy but soon it started becoming tougher; it was more of hiking than trekking. We being we, chose to take more tough, unusual and rough path and there is where I got my first kiss (you may call it as love bite) on my knees from the mountains which gave a tingling effect and a broad cut J “Badhe Chalo and Lakshya toh paana hai” were continuously playing in our minds and we didn’t stop. There were few motivations too (Sobo kinds) which made our trek more interesting, encouraging and also made us reach our first milestone Chota Kalavantin (we gave this name) in almost no time (Don’t forget the adventure of unusual paths we took to reach here). We rested and re-energized here with some snacks and Nimbu Paani @Rs 10/- per glass. 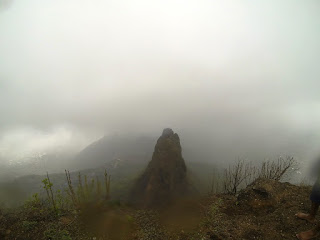 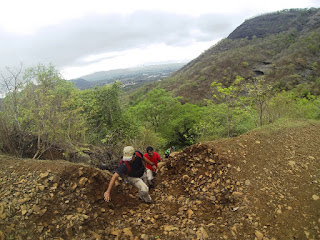 Amidst the clouds and rains we kept on ascending to our next milestone. “Lakshya to paana hai ” was still going on. The path was lil tough with steep hiking and chances of rocks falling over due to heavy rains. Finally we reached our second milestone and view from there was just mesmerizing. This was Prabalmachi village. A very expanse view of mountain ranges made us realize we are just a miniscule part on this earth. We took some cool pics (credit goes to Punit and his GoPro) rested for few minutes, had some snacks and moved on. By the way, at this point we found several other groups too with couple of  firangi groups chitting chatting with local guides. We found few motivations hereto ;) but we decided to move on. (Remember – Lakshya to paana hai) 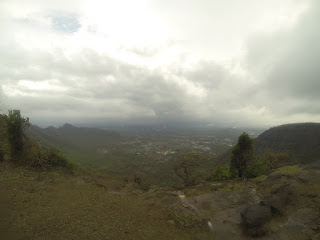 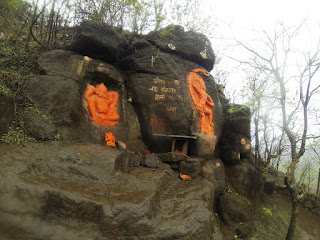 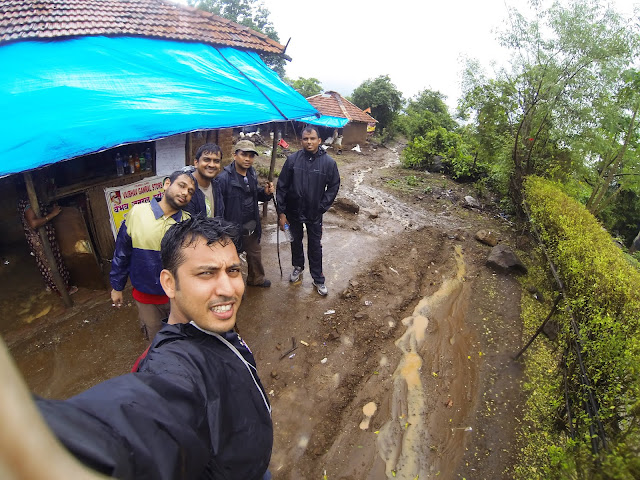 We were standing at the bisection now and it was the time to decide between Kalavantin and Prabalgad. After lot of to and fro, confusions, agreements/disagreements, talking to villagers, we decided to go to Prabalgad mostly because of 2 reasons. First, everyone else was going to Kalavantin and second Punit’s damn cool statement “Ek baar Kalavantin chor diya due to confusion toh aab wapas mud ke nahi dekhenge, Prabalgad hi jayenge” and we did that. We were the only 5 people going towards Prabalgad with almost no idea and proper path marked out. Punit was leading the trek followed by we 4 poor people with absolutely no idea how we gonna reach there. After being lost in the wild couple of times, we returned back to prabalmachi village but then again moved forward with double the confidence. Often we shouted “Jhund hi hamari ekta hai” so that we stay together. After a real long time we found a villager who guided us to the right track (remember, we opted out for the guide in first place) finally we got the traces and we followed the track diligently without stopping anywhere (okay, we stopped sometimes to regain energy :p)
After lot of rock climbing (believe me it was real tough one in rains) passing through water streams and falls, walking on super narrow muddy path with deep valley on the other side and clouds all over with vision of not more than 5 feet, it was all worth it. We found few more people on the way but as expected, no one had any idea where we were and how far we were from our Lakshya. We kept on ascending until we found the plateau. Gosh, this view cannot be explained in words, it is better experienced. 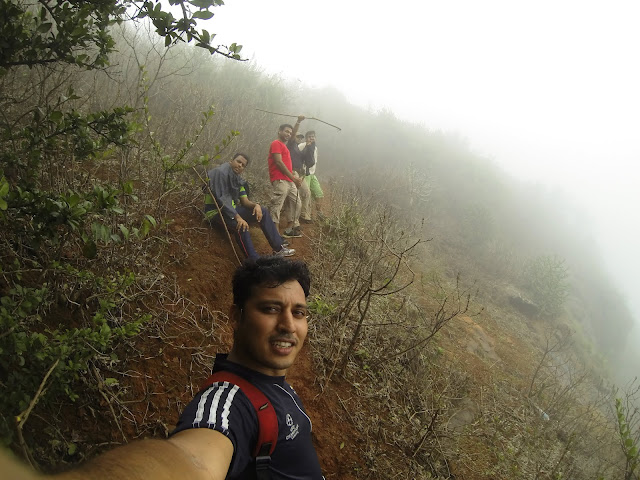 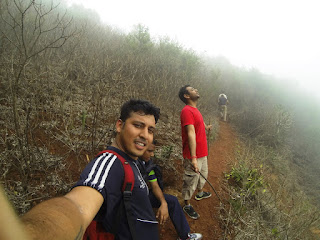 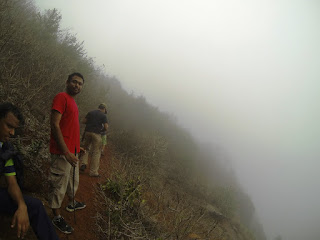 There was a Purana Mandir that was abandoned amidst deep forests. I wish it was an overnight trip and we would have carried tents/sleeping bags/enough supplies with us. A perfect camping site it was, added in the to-do list. By the time we reached the top it was 2 in the afternoon. Papa dude gave us much-hyped so-called “Laddos” which he got from his home. Punit and Papa dude had enough supplies for all 5 of us to survive for few hrs. We hogged on snacks like pigs, had some water, and rested there before we moved to the final point i.e. top of Prabalgad fort.

Trekking in the rains, we reached there and found a “Laal Jhanda” as the final mark of the peak. It was very much similar to the Laal Jhanda of “Bhoota Parvat” from Manali Trek in movie Ye Jawani Hai Deewani. For us it was like “Lakshya paa liye” and we hugged each other in excitement and happiness. That moment was orgasmic and moment of achievement for all of us. I can still feel the mountains, the air, the clouds, the rains, the wilds and the energy all around. It was more than a meditation for me. 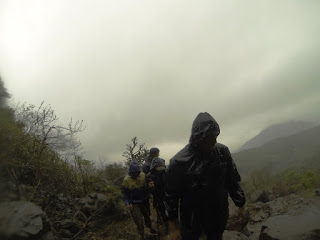 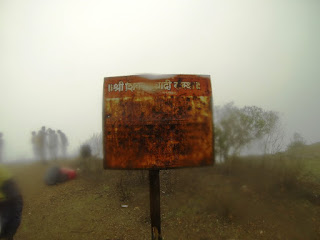 After staying there for quite some time, we started descending which again was equally tough as the path was not that well defined, heavy rains, very low visibility, rocks and muds made it more difficult and slippery. We supported each other while descending and after few slips we finally managed to reach our base camp (Prabalmachi Village) alive. With great sense of achievement in our mind and heart, we stopped by an/only eating joint there and hogged on local food made by the villagers like crazy. It took around 4 hours for us to descend. It was quite dark by the time we reached Thakurwadi, the base village. 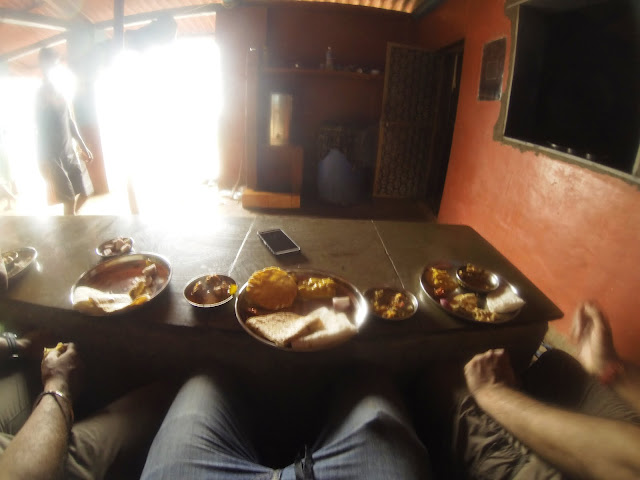 What an awesome day it was. Memorable one. Much more to come..

- No reptiles or animals encountered by us
- Rocks are quite slippery in monsoons
- Carry enough supplies if you wish to camp on the top.
- You can stay at base camp which is Prabalmachi village. 100 rs is what they charge per person
- The only eatery joint at Prabalmachi has some real lip smacking local cuisines right from Tea/Coffee/Snacks to breakfast and lunch Thalis.
- You may also rent out tents from here if you want to camp at the top.
- Wearing trekking shoes advisable, your sports shoes might not support you at stretch.
- Level of Trekking is Easy/Basic in non-monsoon days and Medium in Monsoons

Mumbai to Prabalgad by Road –

Mumbai to Prabalgad by Train-

From Mumbai, trains are easily available to Panvel. From Panvel, there are state transport busses (ST) or local transports available which will drop you to Thakurwadi Village that is almost 15 KM from Panvel.

You may also like reading Rajmachi - A Memorable Overnight Trek in the Mountains :)